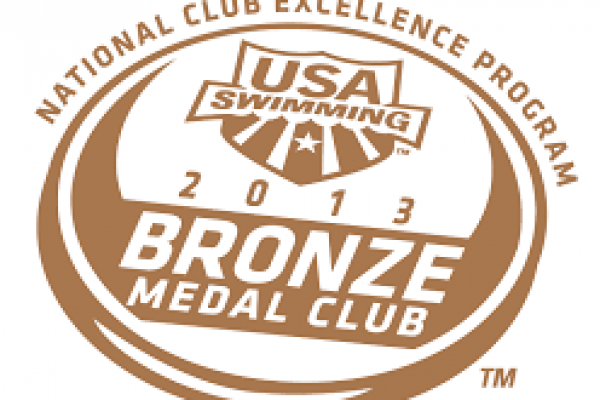 Temecula, CA – For the first year, Temecula Tritons Swim Club has been awarded the top honor of a Bronze medal ranking in the USA Swimming Club Excellence program, recognizing the organization’s highest-performing clubs in the development of athletes 18 years and younger.
USA Swimming Club Excellence program points are earned by attaining summer Junior National Qualifying times. Over the past four years the Temecula Tritons Swim Club has qualified to be a USA Swimming Medal Club. However, this is the first year that we have been awarded Bronze Medal Club. We cannot thank our previous Junior National Athletes enough for helping raise the bar to make this recent achievement possible. These athletes and coaches compete against the top 18 and under swimmers in the country. In the last year Coach Nathan Wilcox has had multiple swimmers finish with in the Club Excellence programs requirements. The following athletes helped TMEC Tritons finish with in the top 200 in country; Hayden Cornellison, Madison Frederick, Liberty Gilbert and Claire Fische. The Temecula Tritons Swim Club is extremely proud of all these athletes have achieved.

“Temecula Tritons Swim Club is honored to be named as on of the top 200 Swim Teams in the Nation” said Nathan Wilcox, TMEC Tritons Head Coach. “I’m extremely proud of our swimmers for helping TMEC be one of the twelve So-Cal Swimming teams selected and the only Eastern Section team selected as a Medal Club” said Nathan Wilcox. “This achievement was reached because of the dedication of our top 18 & Under athletes, their coaches and parents. It’s truly a ‘coaching staff effort’ for us to help every young athlete in our program reach their highest potential. I would like to thank USA Swimming for the recognition of Bronze Medal Club”.

In its 15th year, the Club Excellence program identifies clubs that execute strong, well-rounded programs to produce elite 18-and-under athletes. The top 20 clubs earn Gold level ranking and those rated 21-100 are designated as Silver honorees. The next 100 clubs are recognized at the Bronze level.
“Earning a Gold, Silver or Bronze ranking has become a highly coveted honor for our club teams. The competition to earn a Club Excellence ranking continues to be more and more challenging.” said Pat Hogan, USA Swimming’s Club Development Managing Director. “On behalf of USA Swimming, I want to congratulate each of 200 clubs that have earned a ranking in the 2017 program.”